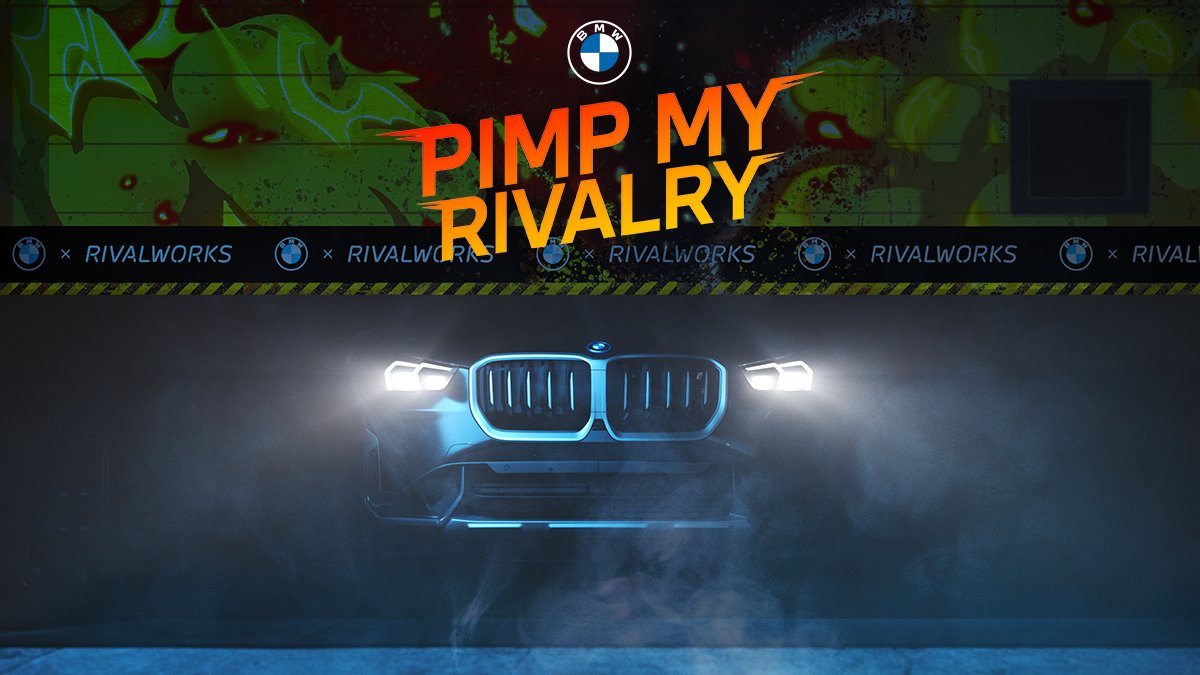 6 BMW Esports teams, 6 stunning BMW i models. It’s curtains for #PimpMyRivalry. Because we think a new BMW in the garage looks pretty neat, we’ve come up with a surprise for our partnered organisations. A BMW i model for each team. We offer the complete range: the first-ever BMW iX1*, the BMW i4* and BMW i3 e-Drive35L* for the Chinese market. Boom! And because Esports is all about being the best, we’ve made it a challenge – the BMW #PimpMyRivalry team car competition. The task: work with a renowned artist, create a striking design and face the vote of the @BMWEsports Twitter community that will roast your ride. And guess what? The teams joined in!

BMW Esports teams are used to winning, and so each of them wants to take to victory lane in the BMW #PimpMyRivalry team car competition. That’s why Cloud 9, Fnatic, G2, FPX, T1 and OG are playing their A-game and made world-class artists of their choice sweat with some bizarre design ideas for their vehicles. Fart clouds, flying bananas, a Pomeranian – it is beyond imagination what the players have wished for. But maybe it’s just this or that surprising detail, this thingy on the left door of the BMW iX1, BMW i4 or BMW i3 e-Drive35L that will take them to the top. Who knows? 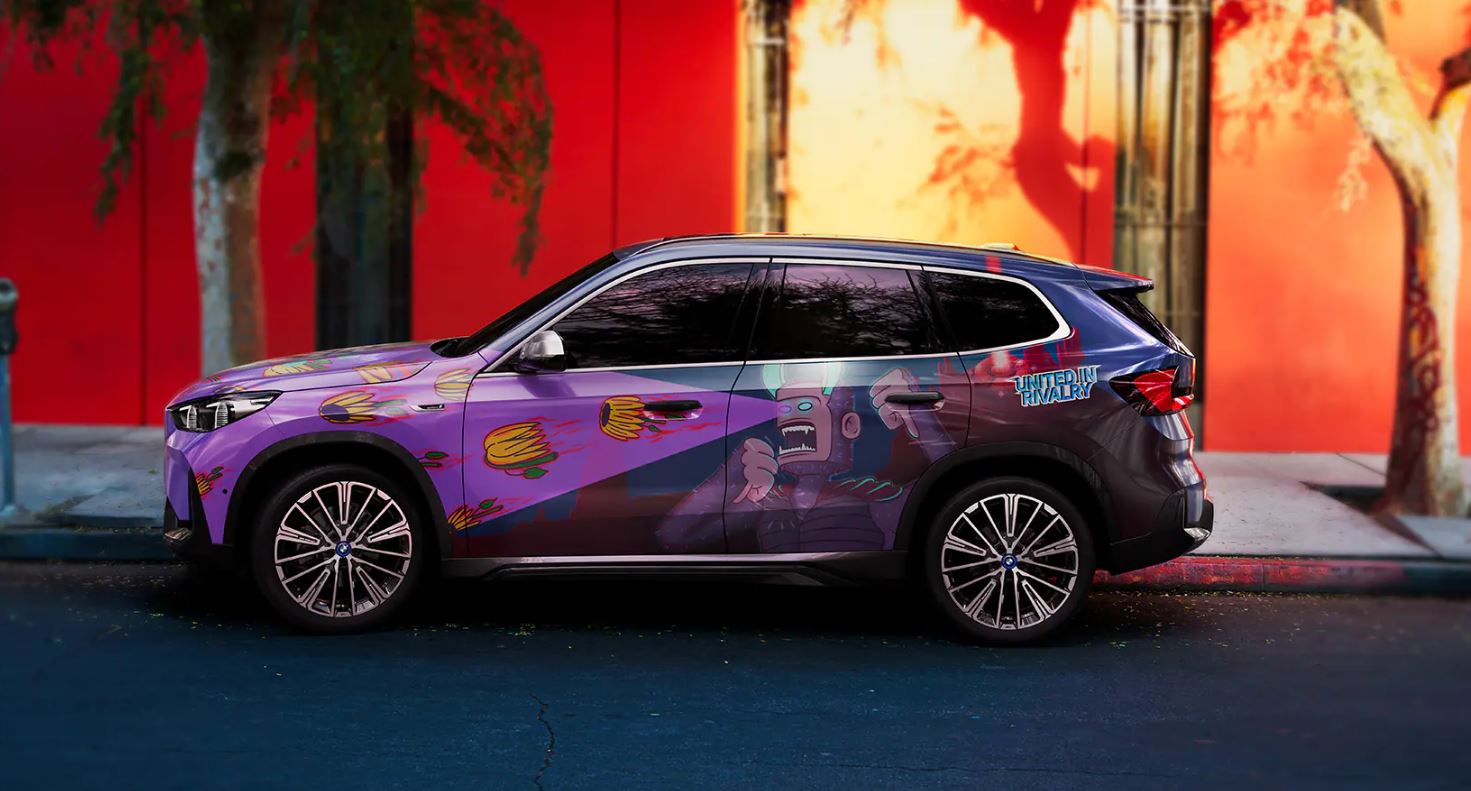 Well, OG is going bananas now, literally. Guys, bananas on a BMW iX1!!! Only our Dota 2 squad could really come up with that. Plus sunflowers and mystical monkey wizards with laser eyes spread all over the bonnet and sides of the car. And the elements are brightly coloured. Man, this car is so OG. We love it. This 4-wheeled work of art was created by Portuguese mastermind João “Cardoz” Cardoso. See the creative process behind the car design for yourself on YouTube. Grab some popcorn and watch it! 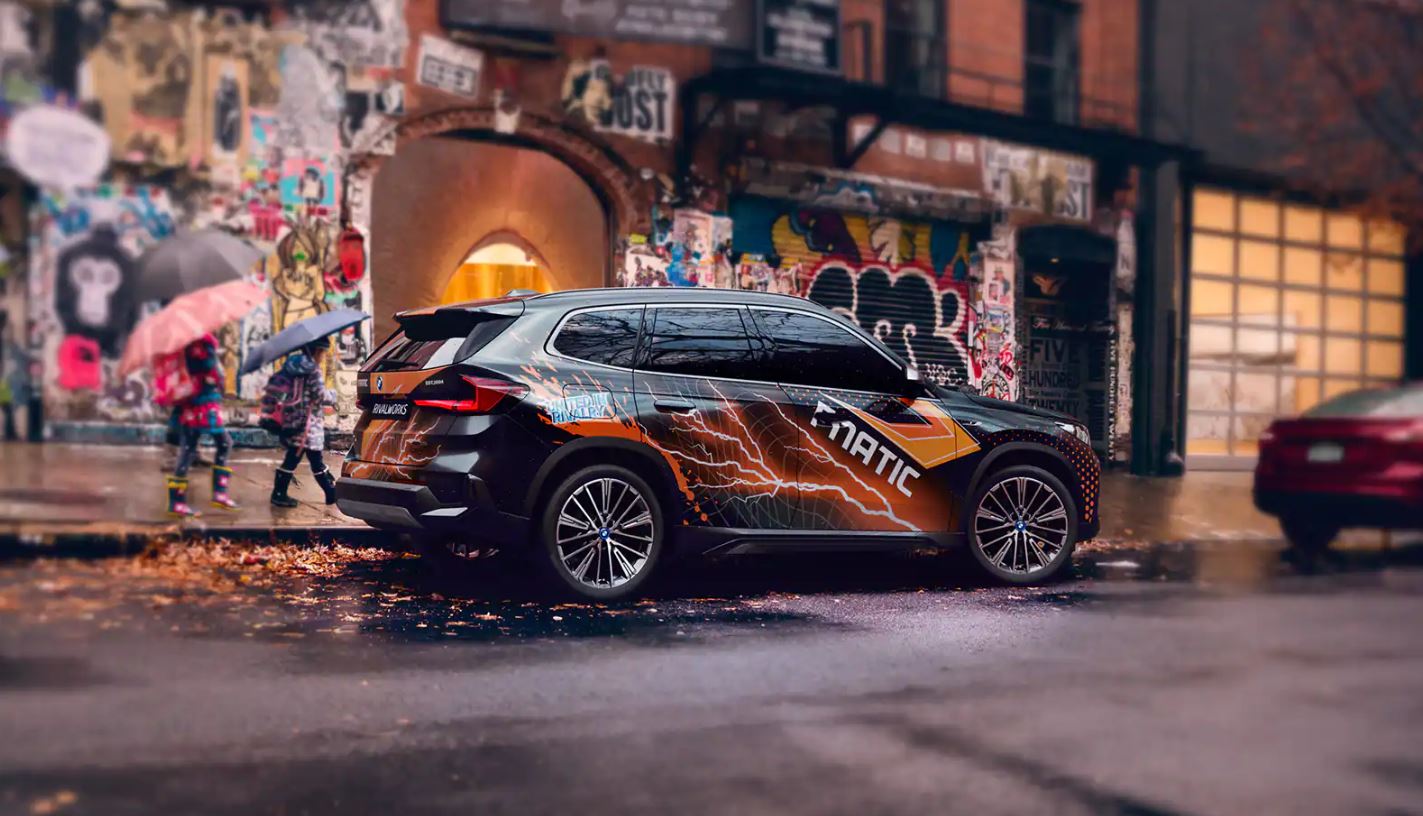 First of all, if we had implemented all of FIFA legend Tekkz’s ideas one-to-one, such as tinted windows all around, the BMW iX1 would no longer have been road-legal 🙂 But splitting the colours orange and black 50:50 on the ride was a done deal. Hey, it’s Fnatic, after all. In the Youtube video, you can immediately sense the good vibes between illustrator Chris Rathbone and FIFA guys Tekks and Diogo. The result is a pretty stylish BMW iX1 with a 3D logo, racing stripes, striking details and a lightning bolt that seems to electrify the vehicle. Naturally, it’s an i model. 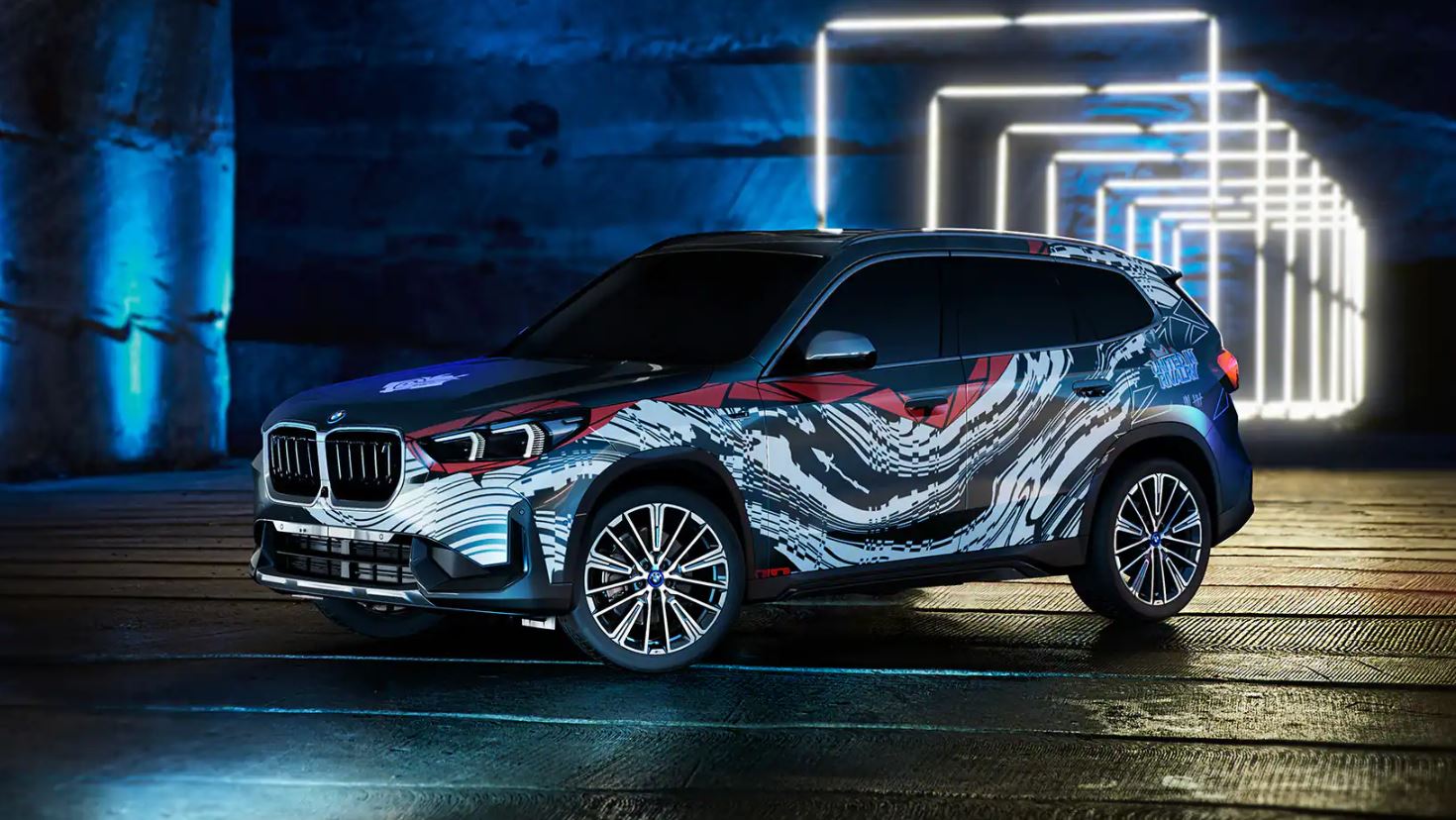 Edgy and cool like the org itself, that’s what the first-ever BMW iX1 has to look like. The players didn’t have to think twice. A G2 honour thing apparently. And yet illustrator Adrian San Gil from Spain had to unleash his dark magic to meet the preferences of Yuli, Caps, Jankos and Flakked. And no, a duck didn’t make it onto the car, sorry Flakked. Shattered chains, a vengeful Rōnin are just two of many eye-catchers on the G2-style BMW iX1. If you see this black, white and red demon on the road, #UnitedInRivalry teams better lock the doors from the inside. Just saying! 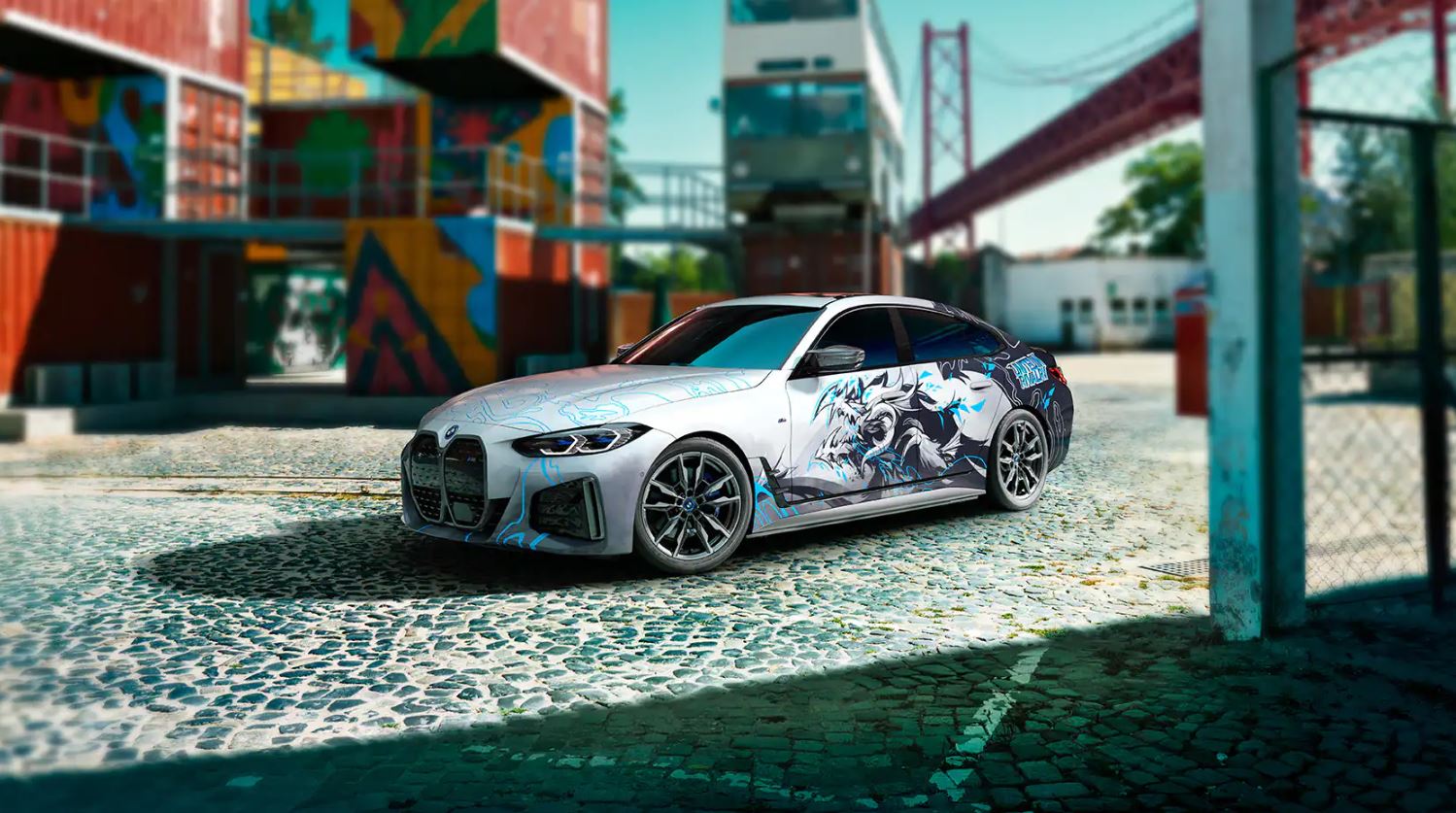 Toronto-based concept artist and designer Sydney Jones was hoping for Cloud 9’s creative A-game. That is, until LCS head coach Max Waldo came up with his very special idea of a red dragon breathing and farting blue clouds. Well, he was pretty convinced of it. “Oh, God, okay, erm…” You might check out Sydney’s reaction to this creative achievement in the YouTube video. With all her talent, she still managed to create a unique blue and white masterpiece. We are sure that for our team from NA, a ride at the wheel of the BMW i4 feels like floating on cloud nine. 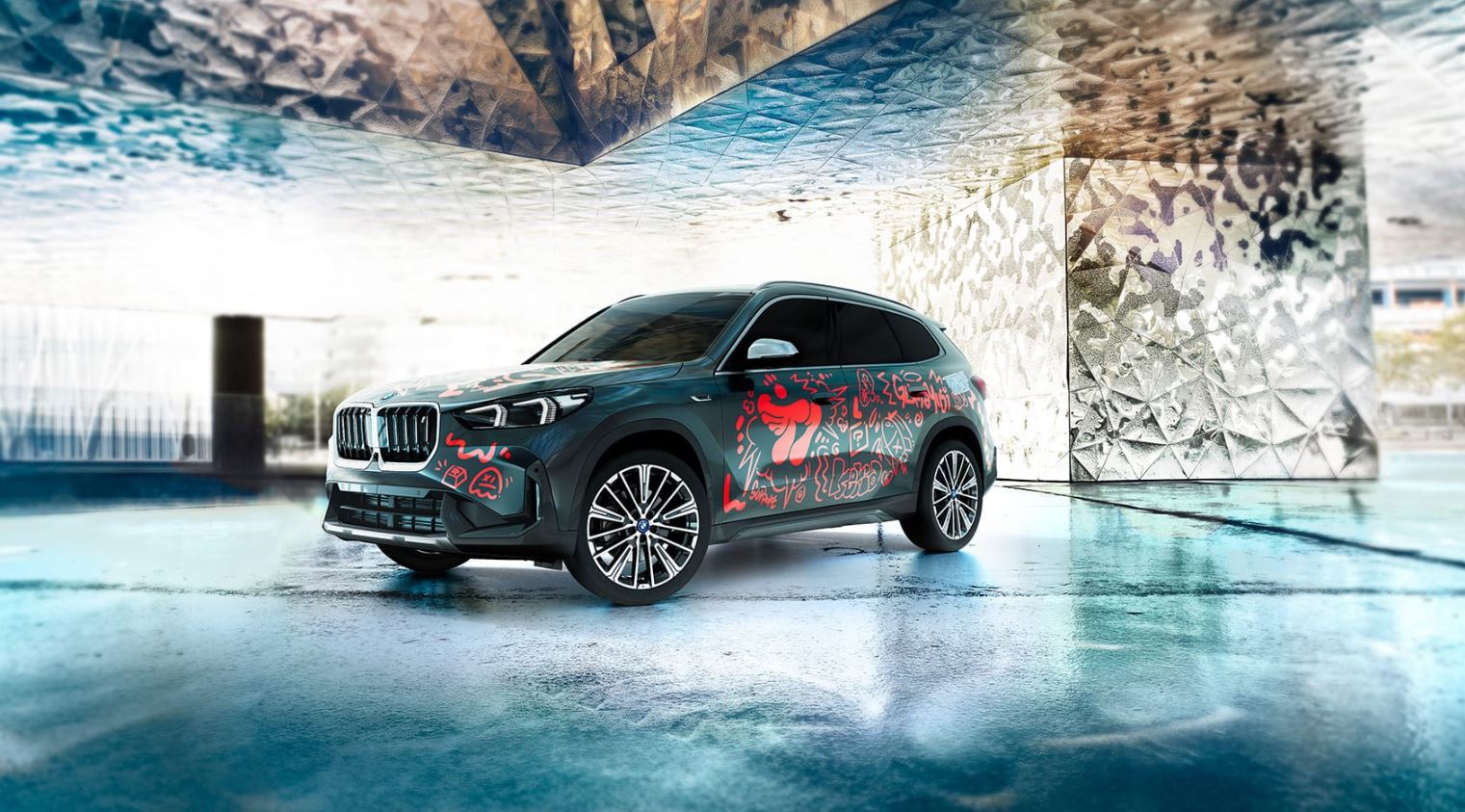 Red flames on black background: CHECK. Tiger stripes: CHECK. A dog? Really, Keria? T1 want a design for their BMW iX1 that represents the entire team. Sounds tough, with so many different and strong characters in the T1 roster. But for Sambypen, a graffiti artist from Seoul, it’s no reason to run away – just as he does from the police after many a spray-painting session. Sambypen has created a piece of art that is so detailed that you have to walk around the vehicle three or four times to take in everything he has put on the roof, bonnet, door and rear. T1’s BMW iX1 looks so street – and that’s where it belongs. 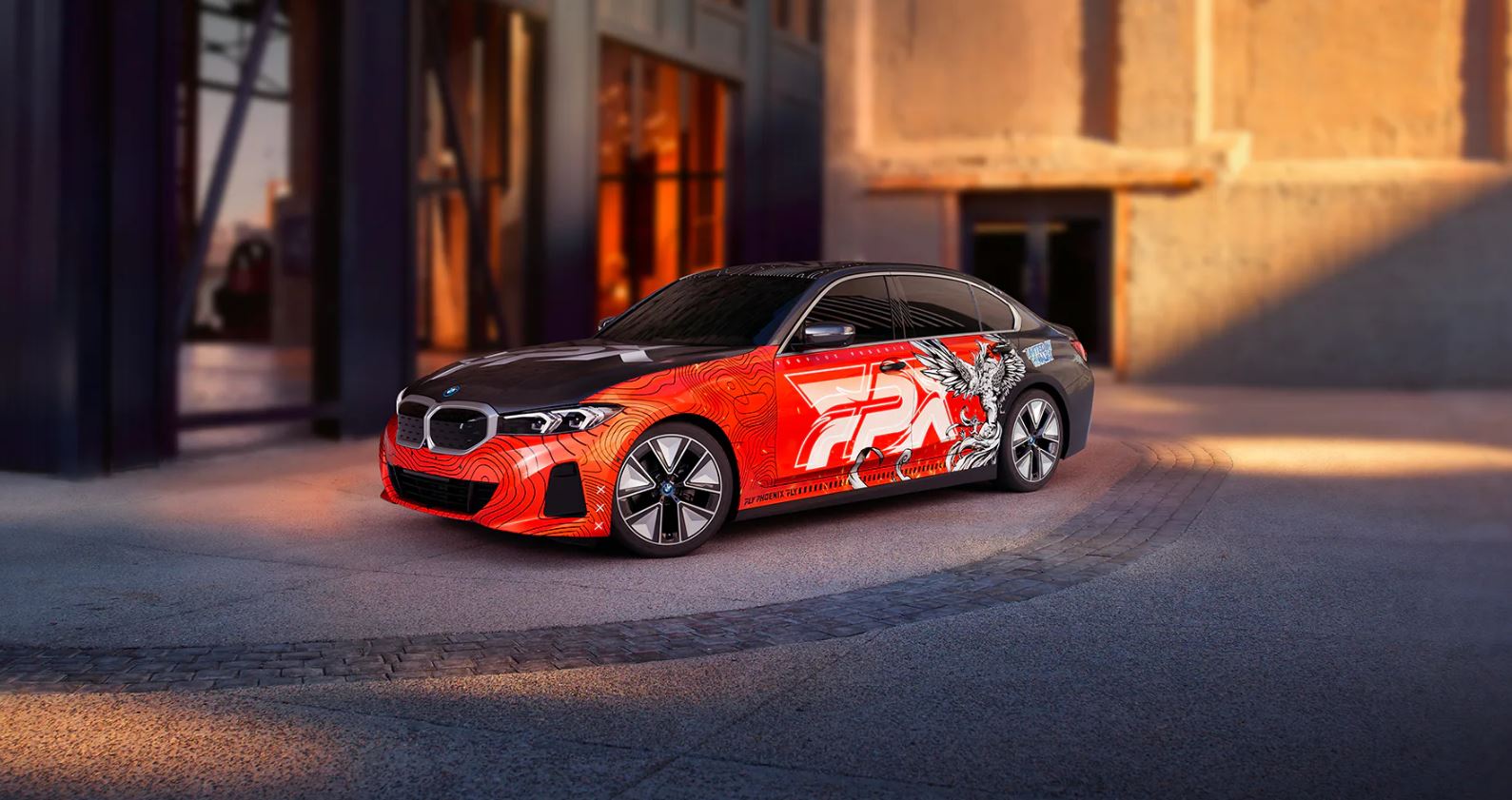 The mighty bird majestically spreads its gigantic wings. Like a tattoo, the white silhouette of the mythical creature covers the skin of the vehicle elevating it to champion of every lane. The Phoenix, FPX’s “heraldic animal”, is the defining element on the BMW i3 e-Drive35L, the all-electric sedan for the Chinese market. Red is the dominant colour on the sides of the BMW i model, adorning the FPX lettering as well as the cheer “fly, Phoenix, fly”. The real eye-catcher of the BMW i3 e-Drive35L is the shimmering silver, highly detailed attack-minded Phoenix with sharp claws on the rear door. A clear message to all FPX rivals: don’t mess with us*.

GGWP BMW Esports Teams! Truly impressive how the organisations have pimped the already emotional designs of the BMW i models to perfection! Both the black and orange of Fnatic and the bright colours of OG make the first BMW iX1 with its upright proportions in the side view look even more dynamic. The first BMW iX1 brings the experience of locally emission-free driving pleasure to a globally growing vehicle sector – so it’s the perfect ride for Berlin or Seoul. Right, G2 and T1, isn’t it?

We came up with a special surprise for our friends from North America. Cloud 9 has its HQ in a beachfront city that aims to achieve community-wide carbon neutrality by 2050 or sooner. The organisation is leading the way with the BMW i4. As the first all-electric Gran Coupé, the BMW i4 combines outstanding dynamics with a high level of comfort and ideal everyday usability. Equipped with fifth-generation BMW eDrive technology, the four-door Gran Coupé offers sporty performance figures of up to 400 kW/544 hp. Who wouldn’t want to cruise through the city with it?