The new BMW M2 delivers signature M performance in a highly concentrated form. With its 338 kW/460 hp six-cylinder in-line engine, an optionally available six-speed manual gearbox and rear-wheel drive, the second generation of the compact high-performance sports car promises unadulterated driving pleasure. The debut of the new BMW M2 marks another highlight event in the model offensive celebrating the 50-year anniversary of BMW M GmbH, while making the first step into the world of its high-performance cars an even more enticing one. 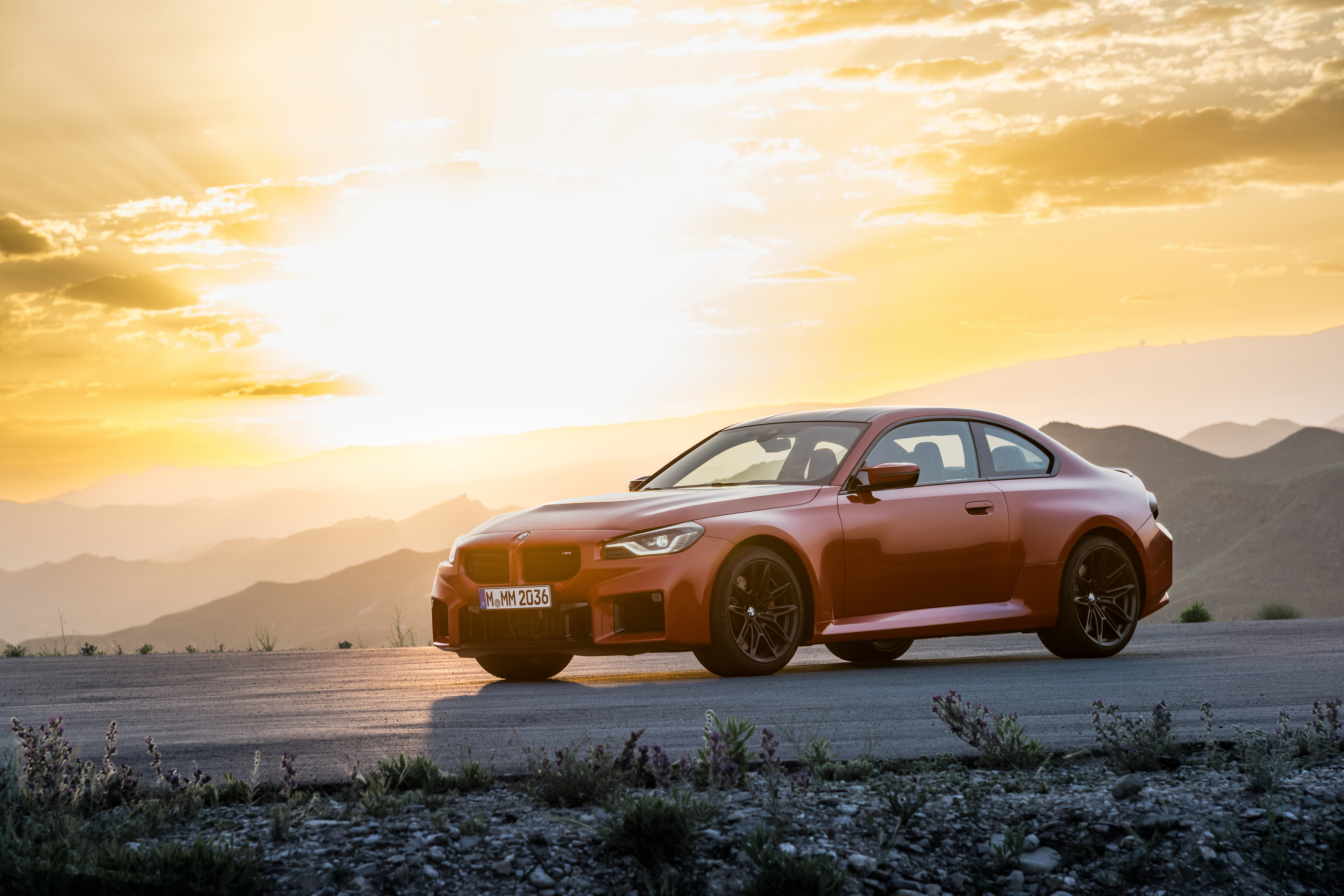 Compact dimensions together with powertrain and chassis technology adapted from the BMW M3/BMW M4 are at the heart of a vehicle concept that endows the new edition of the two-door model with beguiling agility and handling that remain easily controllable even as the driver explores the car’s limits. This distinct character profile also manifests itself in the expressive exterior design with its athletic coupé proportions. The sophisticated control/operating concept for customising the vehicle setup also helps to produce a performance experience of remarkable intensity. Thanks to these many attributes, the new BMW M2 continues the brand’s tradition of ultra-sporty models with compact dimensions that began in 1973 with the arrival of the BMW 2002 turbo. It is also building on the success of its predecessor, which notched up nearly 60,000 sales worldwide.

The global launch of the new BMW M2 will get underway in April 2023. It will be built alongside the new BMW 2 Series Coupé at the BMW Group’s San Luis Potosí plant in Mexico. 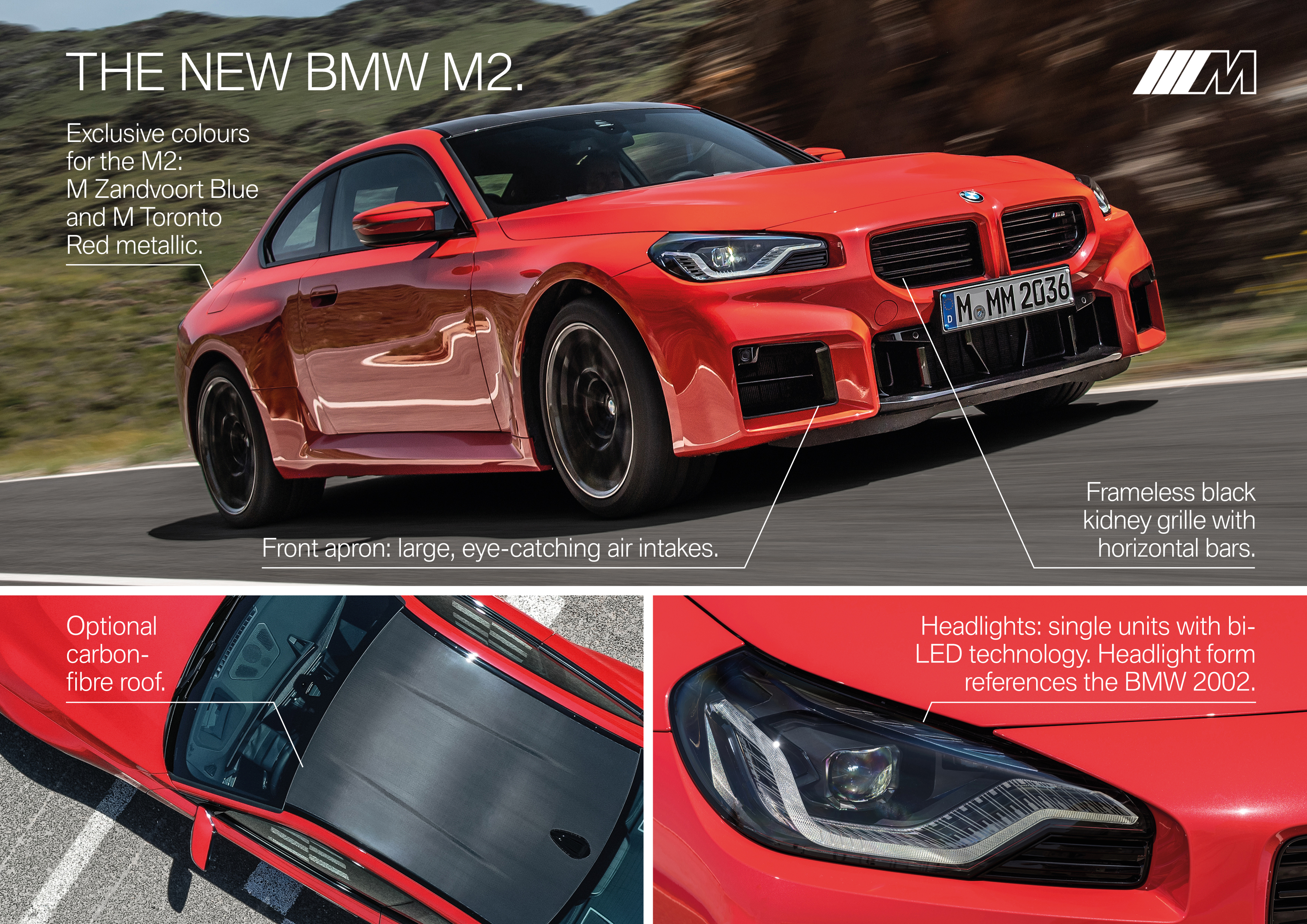 The athletic appearance of the new BMW M2 stems from its compact dimensions, extremely powerful proportions and hallmark M design features. It measures 214 millimetres less in exterior length than the BMW M4 Coupé models and has a 110-millimetre shorter wheelbase. At the same time, the vehicle and track widths exceed the figures for the new BMW 2 Series Coupé by a considerable margin.

The large, frameless BMW kidney grille with its horizontal bars combines with a three-section lower air intake with almost rectangular contours to give the front end of the car a familiar M look. The design has been crafted around technical requirements in terms of cooling air supply and aerodynamic balance. Clearly designed surfaces, prominently flared side skirts and muscular wheel arches set the tone for the side view. The rear end of the new BMW M2 also has a compact, powerful feel and adds a number of individual touches in the form of the eye-catching spoiler lip on the boot lid, the vertically arranged reflectors, the rear apron’s diffuser insert – with its puristic design – and the two pairs of exhaust tailpipes positioned a long way in from the outer edges.

The choice of five exterior paint finishes available for the new BMW M2 includes the Zandvoort Blue solid and Toronto Red metallic shades exclusive to this model. An M Carbon roof that reduces vehicle weight by around six kilograms is offered as an option.

Six-cylinder in-line engine with instantaneous power delivery and a thrilling appetite for revs. 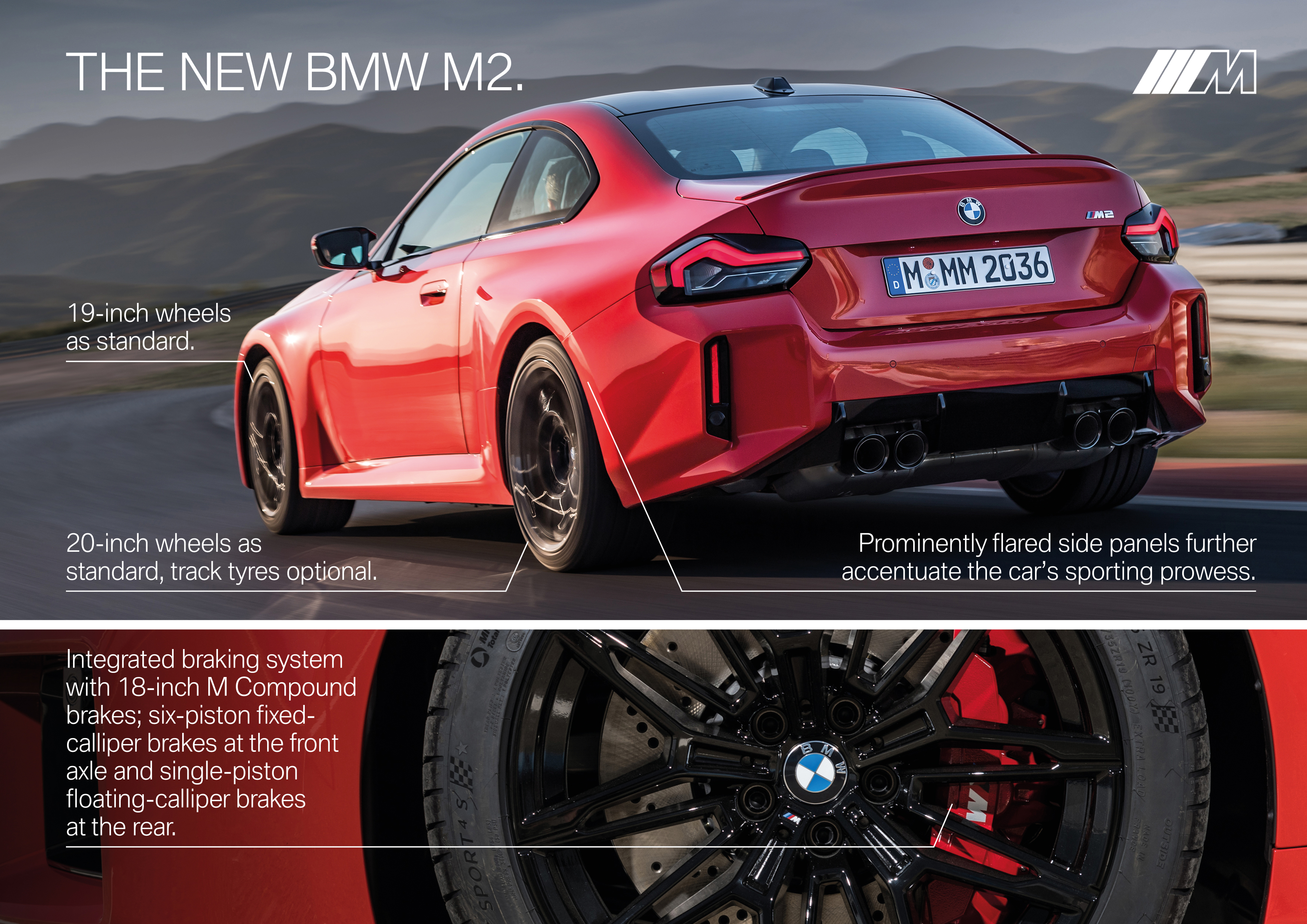 The version of the straight-six engine developed for the compact high-performance model with M TwinPower Turbo technology and high-revving design stands out with its M-typical performance characteristics. Differing only in a small number of details from the engine employed in the BMW M3 and BMW M4 models, the 3.0-litre unit thrills with its urgent response, healthy appetite for revs and linear power delivery into the highest reaches of the engine speed range.

Developing a maximum output of 338 kW/460 hp, the engine under the bonnet of the new BMW M2 outguns the base unit used by its predecessor by 66 kW/90 hp. Peak torque of 550 Nm (405 lb-ft) is produced between 2,650 and 5,870 rpm with maximum output arriving at 6,250 rpm. The new engine revs to a maximum 7,200 rpm. The pulsating build-up of power is accompanied by an emotionally rich soundtrack generated by the M-specific exhaust system with electrically controlled flaps. The system of oil supply is designed to handle extremely dynamic driving situations when out on the track, as is the cooling system.

A choice of performance experience: eight-speed M Steptronic transmission with Drivelogic as standard, six-speed manual gearbox as an option. 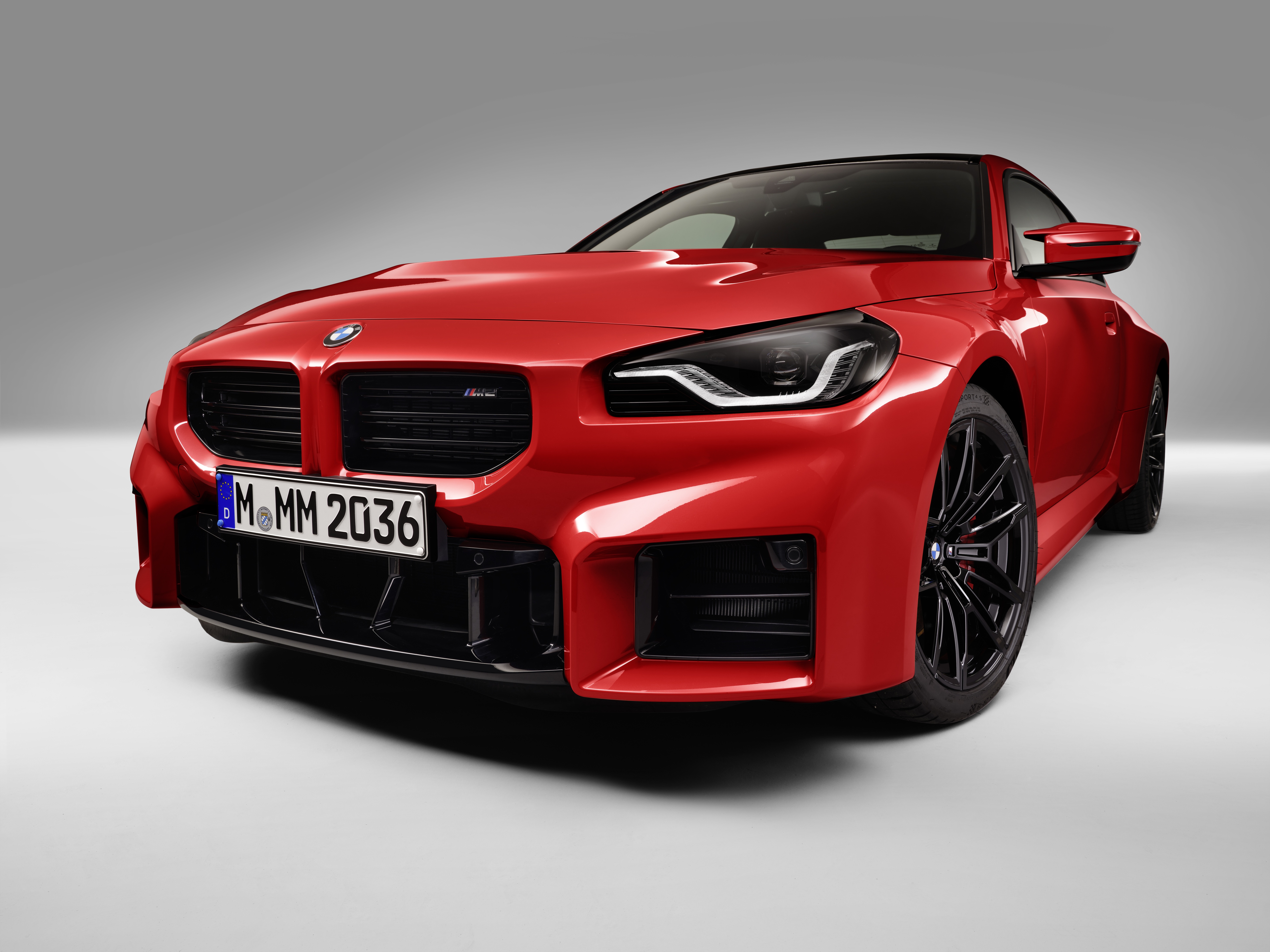 The engine’s power is relayed to the rear wheels via an eight-speed M Steptronic transmission with Drivelogic as standard. Its extremely sporty gear shifts, direct connection to the engine and ability to execute multiple downshifts to the lowest available gear form the ideal basis for beguiling, instantaneous acceleration. It is operated by means of a selector lever sporting the latest M design as well as shift paddles on the steering wheel. The Drivelogic function offers a choice of three shift settings.

A six-speed manual gearbox is available as an option for anyone seeking a performance experience in the classical mould, rooted in the intense interaction between driver and car. It lends itself to a sporty style of driving thanks not only to its precisely defined shift action, but also the Gear Shift Assistant, which uses engagement speed control to ensure slip-free operation when downshifting under braking into corners. If required, the Gear Shift Assistant can be deactivated in the M Setup menu. 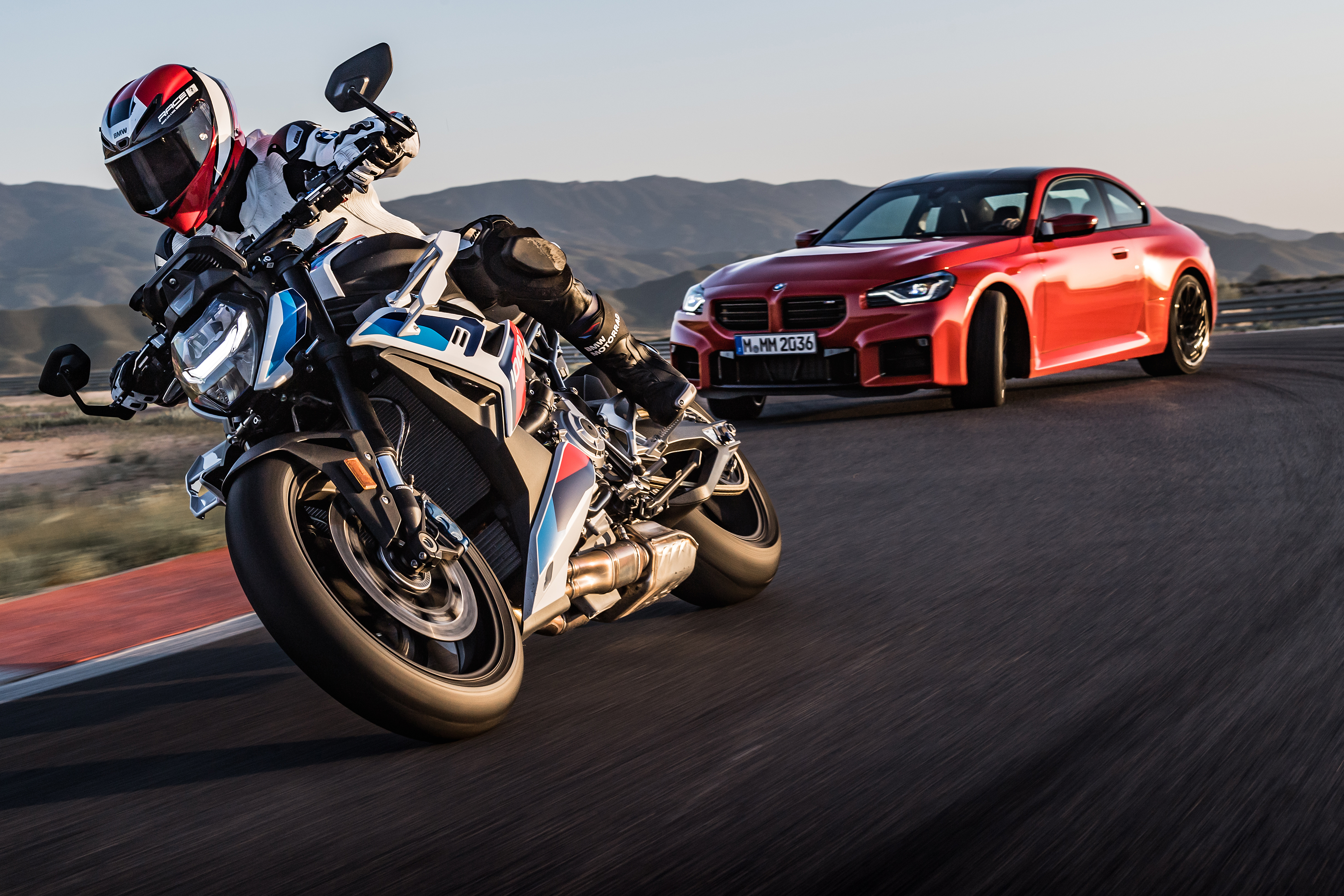 Regardless of the choice of transmission, the new BMW M2’s traditional form of dynamic performance is also embodied by its rear-wheel drive. The linear build-up of lateral acceleration forces characteristic of M models helps the driver to guide the car through corners with controlled drifts, for example. The standard M Traction Control function is also designed to allow the driver to carefully probe the vehicle’s performance limits by setting individual intervention thresholds for wheel slip limitation, with a choice of ten stages.

Another contributor to the sublime dynamics of the BMW M2 is the Active M Differential at the rear axle. Also included as standard, it is able to seamlessly generate a locking effect of up to 100 per cent whenever required. This optimises traction on road surfaces offering different levels of adhesion for the left- and right-hand rear wheel, for example, as well as improving power transfer when accelerating hard out of corners. 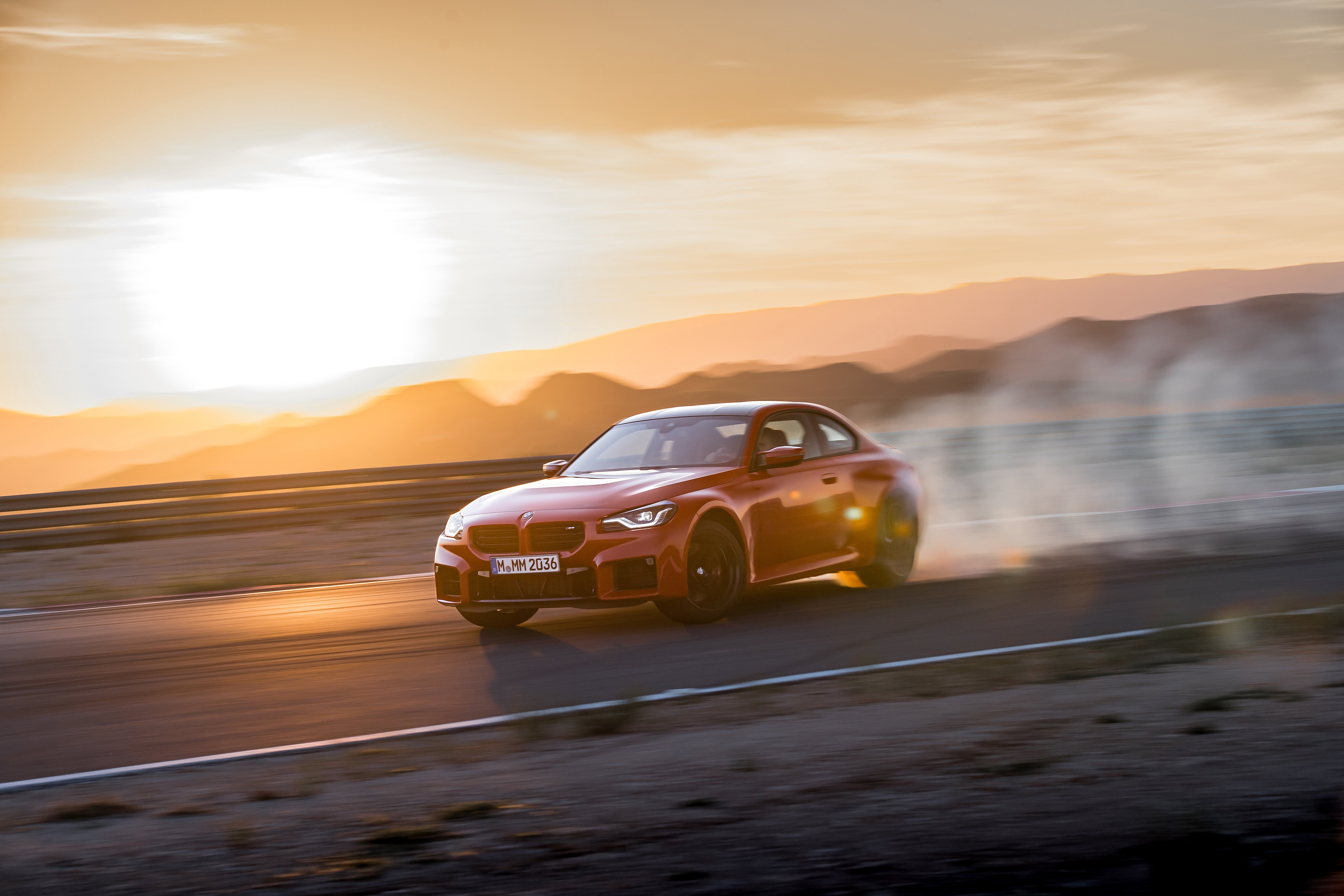 Both the double-joint spring strut front axle and the five-link rear axle come with M-specific kinematics. The standard equipment roster for the new BMW M2 includes adaptive M suspension with electronically controlled dampers, M Servotronic steering with variable ratio, DSC (Dynamic Stability Control) including M Dynamic Mode, and powerful M Compound brakes with six-piston, fixed-calliper brakes at the front and single-piston, floating-calliper brakes at the rear. The integrated braking system presents the driver with two pedal feel settings. The new BMW M2 comes with 19-inch light-alloy wheels at the front and 20-inch items at the rear, each representing an increase of one inch on the diameter of the wheels fitted as standard on the BMW M3 and BMW M4 models. There is also the option of fitting them with track tyres. 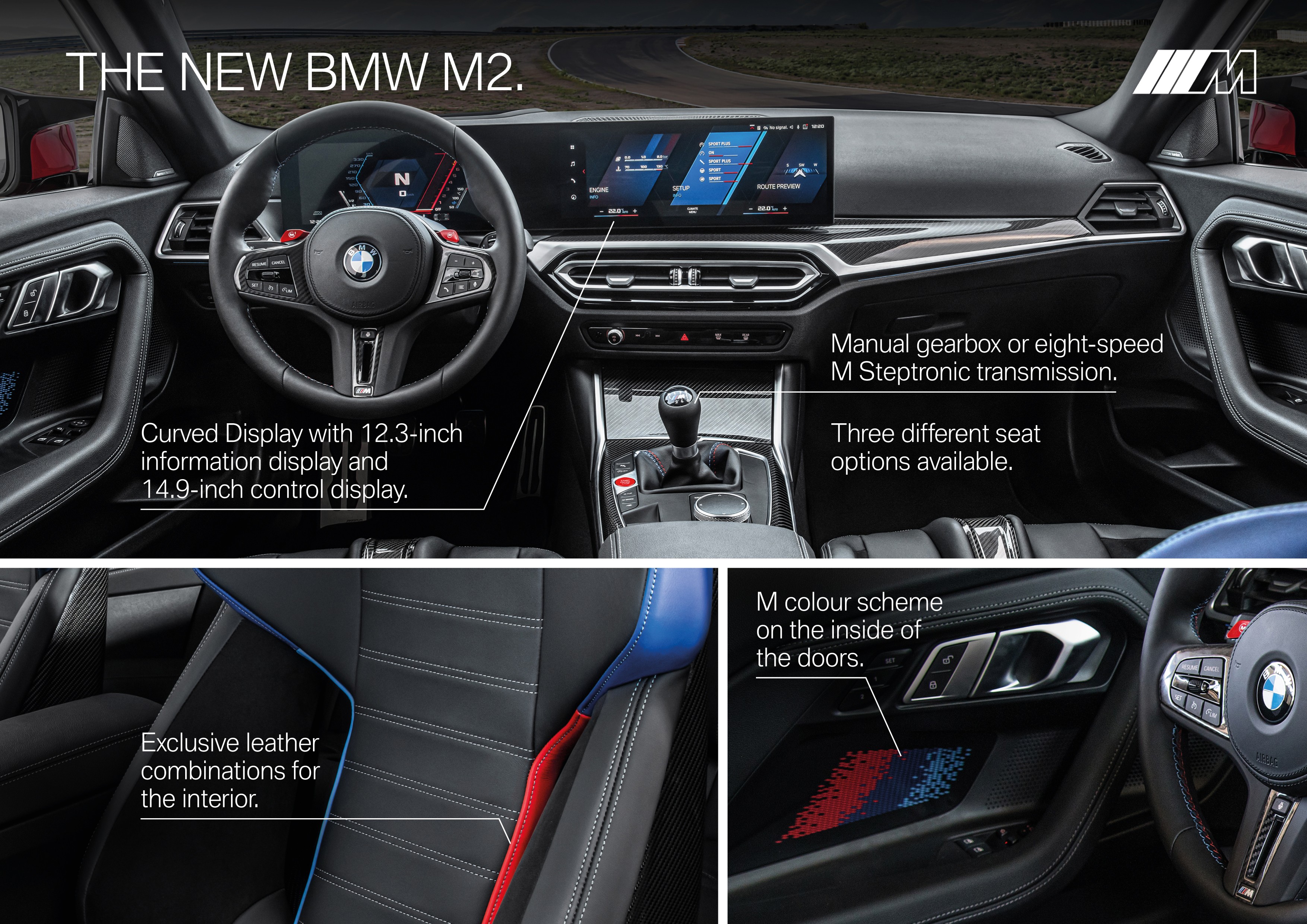 The new BMW M2 boasts a cockpit with a driver-centric design featuring M-specific readouts, controls and setup options, as well as the advanced BMW Curved Display. Driving-related information including Shift Lights appears in a new graphical layout on the 12.3-inch information display. M-specific widgets for vehicle setup and tyre condition are just two of the items that can be called up in the 14.9-inch control display. The optional BMW Head-Up Display also features M-specific readouts.

Both the BMW Curved Display and the BMW Intelligent Personal Assistant form part of the latest-generation BMW iDrive. Based on BMW Operating System 8, it has been purpose designed for intuitive interaction between driver and vehicle using touch control and natural language. The new BMW iDrive system enables personalisation with the BMW ID and My BMW App as well as allowing a Personal eSIM to be used in the vehicle. Smartphone integration for Apple CarPlay® and Android Auto™ is likewise included as standard on the new BMW M2, and there is also a 5G antenna system for optimised connectivity.

The driver and front passenger are welcomed as standard by sport seats in a model-specific design with Sensatec/Alcantara surfaces. M Sport seats with integral head restraints and perforated surfaces in Vernasca leather/Sensatec are available as an alternative. The M Carbon bucket seats that can also be found on the options list use carbon fibre-reinforced plastic (CFRP) in the structural elements of the seat cushion and backrest and also feature cut-outs in the side bolsters and below the head restraints, thereby shaving around 10.8 kilograms off the vehicle’s weight. 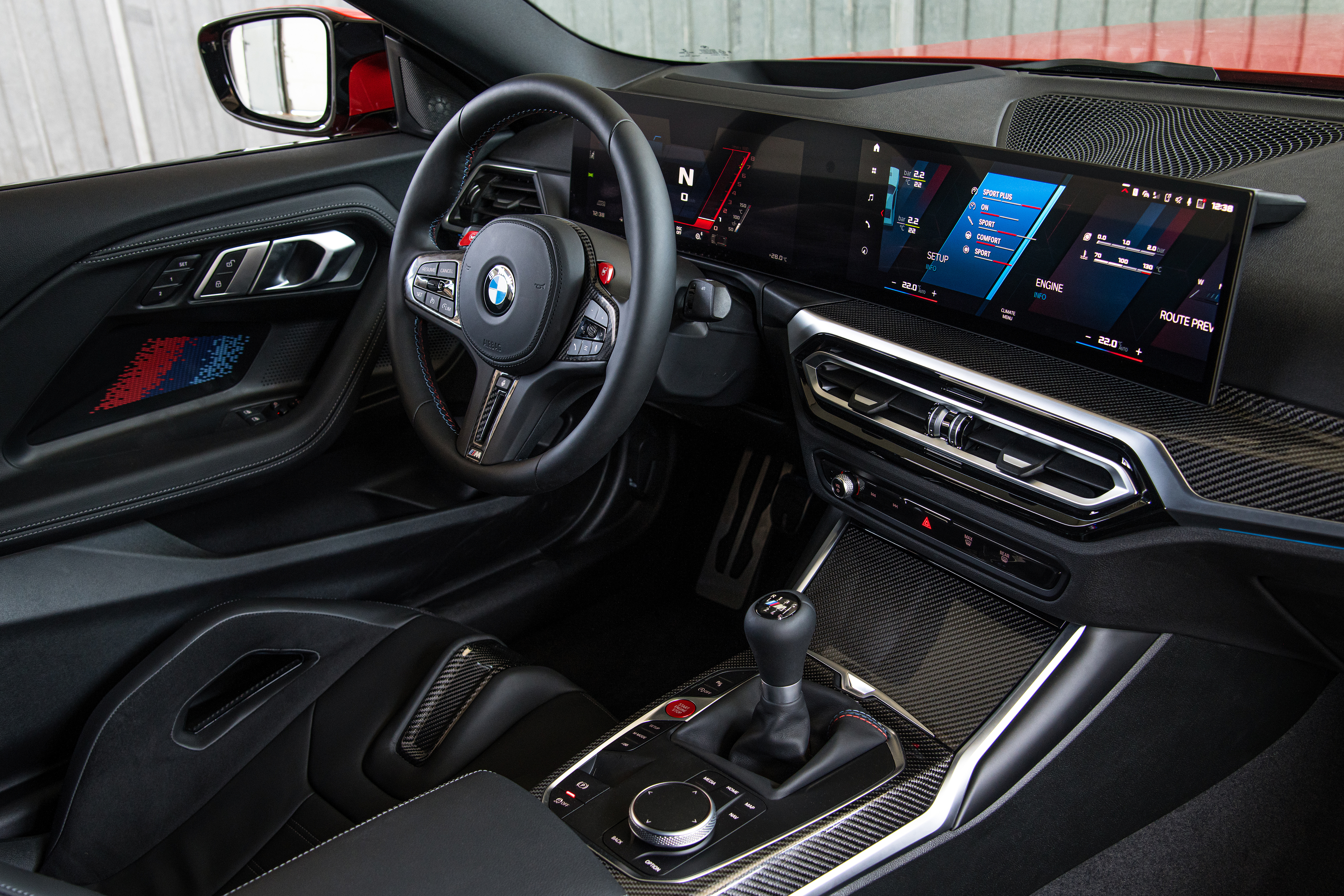 The comfort features fitted as standard in the new BMW M2 include three-zone automatic climate control, BMW Live Cockpit Plus complete with BMW Maps navigation system, ambient lighting and the Hi-Fi speaker system. When it comes to automated driving and parking systems, the Front Collision Warning, Speed Limit Display with no-overtaking indicator, Lane Departure Warning and Park Distance Control functions all come as standard. The Driving Assistant, Active Cruise Control with Stop & Go function and the Parking Assistant including Reversing Assistant are just some of the options available.

The Setup button on the centre console provides direct access to the settings options for the engine, chassis, steering, braking system and M Traction Control, as well as the Gear Shift Assistant if fitted. Two overall vehicle setups can be stored and then retrieved using the M buttons on the steering wheel.

Besides M Traction Control, the standard-fit M Drive Professional also includes the M Drift Analyser and M Laptimer. Plus, the M Mode button on the centre console can be used to adjust both the level of driver assistance system activity and the content shown in the information display and Head-Up Display, with a choice of ROAD, SPORT and TRACK settings. 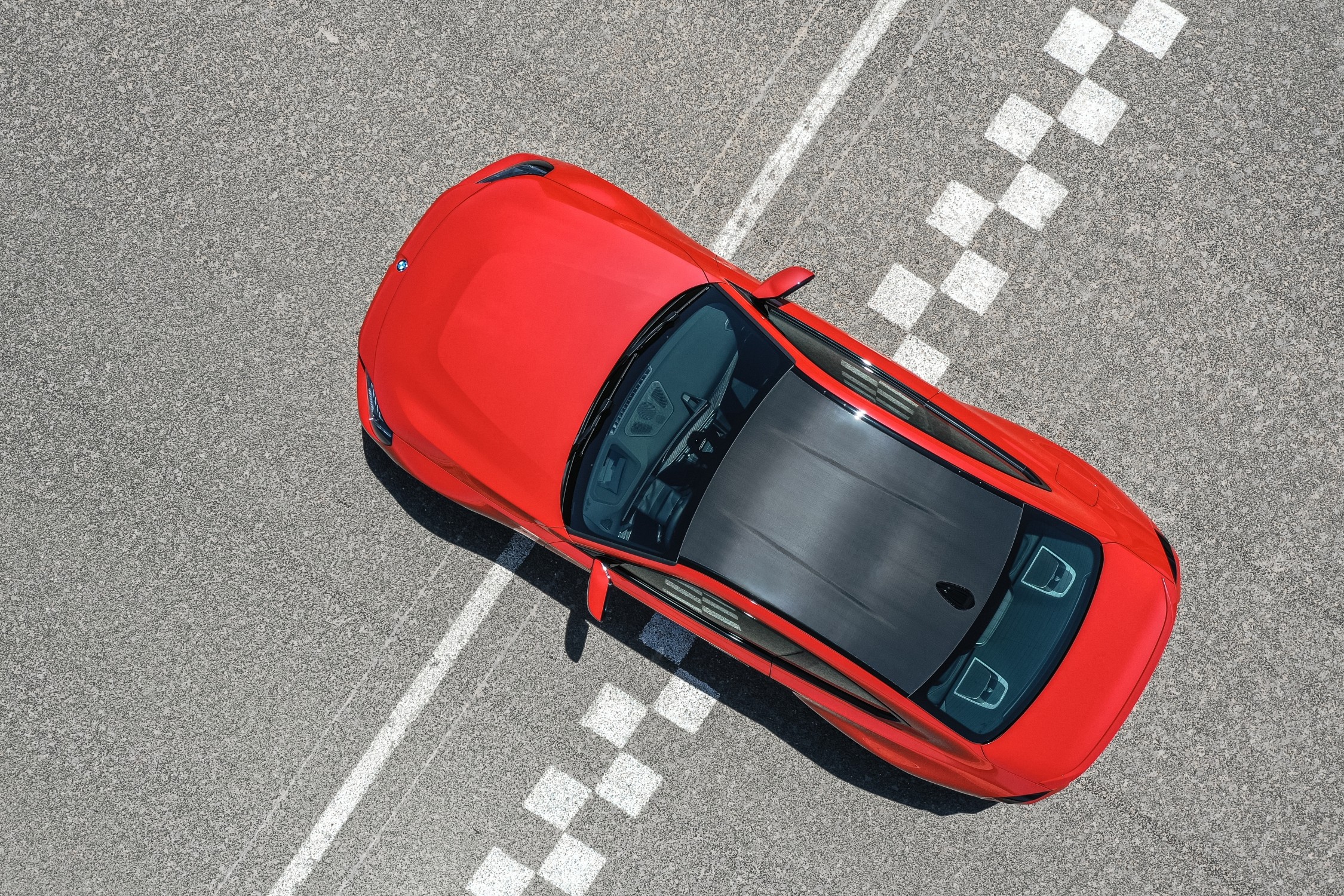