Life writes the best stories. Sometimes they are charming anecdotes, other times nerve-wracking experiences – but no matter what, they all make our everyday lives more interesting. Provided they end well, they remain a memory which we are happy to look back on and share with others. The same applies to the exploits of BMW drivers all over the world, which thanks to BMW Service all came to a satisfactory conclusion. We have put together a selection of stories about things that have happened to BMW drivers in various parts of the world. Spoiler alert: No matter how bizarre, funny, dangerous, or emotional, BMW Service was always able to help. 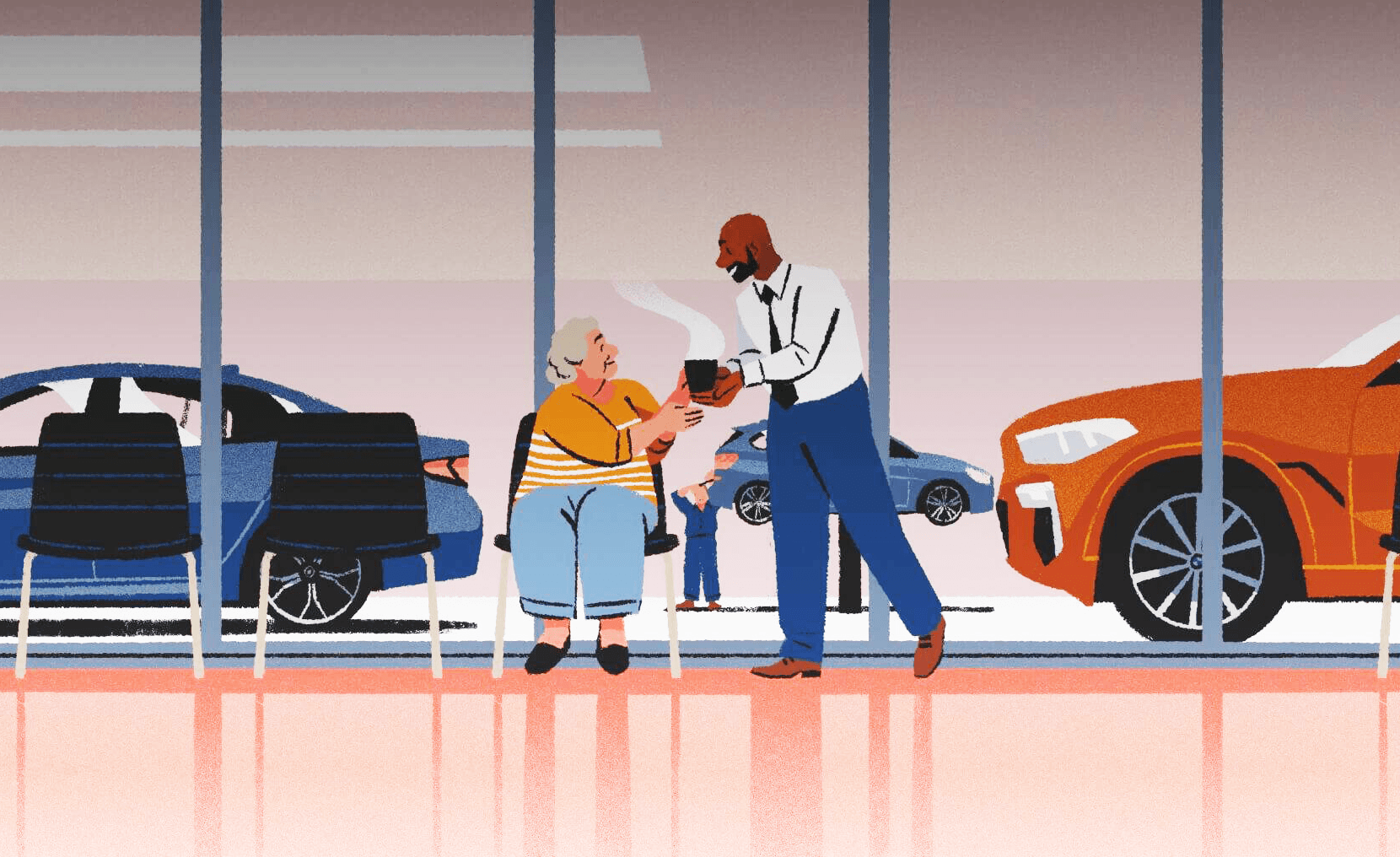 A few years ago, the father of a family in the town of Mineralnye Vody in southwestern Russia always found himself puzzled by two questions whenever he got into his BMW 5 Series. The first was: Why did his drive vehemently refuse every CD he tried to insert into the slot? This annoyed him to no end because he liked to use the time he spent in the car listening to music. He decided to have a professional take a look at the problem and made an appointment with his local BMW Service.

The second question was less pressing and had nothing to do with the car. But now and then, he would wonder what happened to the small change he put in the cup holder after every shopping trip. He rarely used the change, but it always disappeared within a few days.

If you add two and two together, you will quickly find the answer to this question, especially when you consider that he was a father of young children. When a BMW Service Technician removed the front of the CD drive, there appeared a well-filled piggy bank which the BMW driver’s children had been industriously feeding with coins. The Service Technician replaced the drive with Original BMW Parts, and the children’s father was happy to be able to listen to music again. The only thing that BMW Service didn’t do for him was talk to his children afterwards.

Traffic is hectic in Thailand’s capital, Bangkok. How could it not be, when more than eight million people converge in cars, on scooters or on bikes every day? The city’s inhabitants are used to the daily stress of navigating the traffic. But sometimes there’s a surprise in store for even the most experienced drivers. Like the completely distraught owner of a BMW Z4 who had BMW Roadside Assistance take his car to BMW Service in Bangkok:

An inquisitive monitor lizard had wandered into Bangkok’s traffic, climbed up behind the parked roadster’s wheel suspension and was unable to get out. The desperate driver was profoundly thankful that BMW Service was able to take care of the problem in a speedy, straightforward manner. The gigantic reptile was freed from the car without anyone getting hurt. This was quite the feat, considering that this type of lizard can grow up to three meters in length and has razor-sharp claws and teeth. The monitor lizard was set free and will hopefully avoid Bangkok’s traffic in future. The driver of the BMW Z4 got away with a nasty fright.

One day, an Italian winemaker turned up at Milan’s BMW Service in the passenger seat of a BMW Roadside Assistance vehicle towing his BMW 5 Series, which refused to start. The Service Technician took a look under the hood and investigated all the parts that could be causing the problem. When he couldn’t find anything, he began inspecting the car closely from front to back. When he got to the spare wheel well, he made an interesting find: Numerous broken bottles that had previously held sparkling wine now filled the space intended for the spare tire. The winemaker, who had lost none of his good humor, took it with a wry smile when he was told that the electronics were no longer working because his control unit was “drunk.”

The Service Technician cleaned and dried the entire trunk and replaced the control unit. He then installed a molded mat in the trunk and showed the winemaker how easily he could protect the control unit from further debauchery with Original BMW Accessories.

During the first coronavirus lockdown in the spring of 2020, a young woman brought her BMW X6 to a BMW Service Partner in the English city of King’s Lynn. She was in floods of tears: For some time, smoke had been coming out of the exhaust of her car, which she had bought from a used car dealer six months before. However, the dealer was unable to do any repairs because of the lockdown. As the Service Advisors calmed her down, they found that the young woman was a nurse at the local hospital and looked after Covid-19 patients every day. But she couldn’t get to work without a car, which explained why she was so upset – it was quite literally a matter of life or death.

Although the BMW Service Partner’s capacities had also been reduced to the bare minimum because of the lockdown, they immediately took the car in and quickly found the source of the smoke: The turbo was damaged and had to be replaced by a new one. Meanwhile, the nurse was given a Loaner Car and was able to go to work. Fortunately, the spare parts were delivered quickly and the nurse was able to collect her perfectly functional BMW X6 just two days later, meaning there was nothing more standing in the way of her and her life-saving work.

One cold fall day, a Belgian BMW driver called BMW Pick-up & Delivery to his home because his car wouldn’t start and there were unusual sounds coming from the rear wheel suspension. As nothing was apparent at first glance, BMW Service took the car away so that they could inspect it thoroughly on the lifting platform. When he got to the rear wheel, the Service Technician suddenly found himself looking into two big green eyes.

A tiny kitten was stuck behind the wheel. Looking for somewhere to spend the night, the animal had made itself comfortable on the still-warm brake disks. The wheel and brake disks were accordingly dismantled and the kitten freed. But that wasn’t all: The Service Technician immediately fell in love with the tiny stray and decided to give him a new home.

One day, an Italian businessman noticed a muffled vibration while out driving, so he took his BMW 5 Series to the BMW Service Partner in Milan. What started out as straightforward request turned into a bizarre challenge for the Service Technicians: When they opened the car door, they were startled by an unbearable odor that immediately made them recoil. The driver hadn’t mentioned it when he gave his BMW over into their safekeeping.

Equipped with masks, they made a second attempt to find the source of the odor, since this had to be dealt with before they could turn to the actual problem. In the trunk of the vehicle they found a mummified fish – covered by a delicate lace cloth.

Not knowing what to do with the fish, one of BMW’s service staff contacted the businessman’s secretary and asked for instructions. These turned out to be just as bizarre as the discovery itself. The fish was an important part of his private art collection and was not to be removed under any circumstances. The Service Technicians accordingly did all the work without disturbing the fish under the lace cloth.

A BMW Service Partner in Belo Horizonte became the setting for a story which more than lived up to the city’s name. “Belo Horizonte” is Portuguese for “beautiful horizon,” and the dedication shown by BMW Service certainly made the horizon – or at least parts of it – more beautiful for one person.

The story began with a 1997 BMW 740i. A young man had been saving for this car for many years because he had long dreamed of restoring it. Shortly after he bought the car, the young man found out that he had cancer and had to invest all his savings in medical treatment. The car remained untouched in the garage.

While the young man battled the disease, his mother did everything in her power to lift his spirits during this difficult time. And she was successful: The BMW Service Partner in Belo Horizonte decided to undertake the project. The dedicated Service Technicians put all their heart and soul into restoring the classic car for him.

BMW SERVICE IS ALWAYS THERE FOR YOU

All these stories show that the life of every BMW driver is unique. This also means they have individual requirements and needs. That’s why BMW Service offers the best solution for every situation, no matter when or where. For all of your service needs in Ottawa, Canada, come schedule a service appointment here!